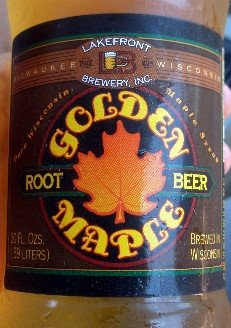 I’m not much of a root beer drinker. However, while traveling through the south end of Milwaukee, I happened to notice and pick up a plastic bottle of Lakefront Brewery’s Golden Maple Root Beer from the refrigerated cooler of a local cider mill. Immediately, I was intrigued: one of my favorite breweries had decided to make a root beer, and not only that, but had decided to add in maple syrup!

Lakefront Brewery’s root beer had the light amber hue of honey instead of the dark brown color that is traditionally asserted in root beers. I looked over the ingredients of the beer (yes, even though it’s non-alcoholic, I’m calling Golden Maple a beer): carbonated water, pure cane sugar, pure Wisconsin maple syrup, caramel color, natural root beer flavor, gum acacia, preservatives- sodium benzoate, potassium sorbate. I was relieved; Sprecher, my other favorite Milwaukee brewery, makes root beer but adds in high fructose corn syrup. With Lakefront, there wasn’t a high fructose corn syrup molecule in sight. However, the intense golden color of the beer did make me a bit antsy.