Guess what’s lurking in your food 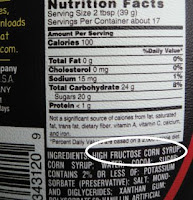 Strolling down the chaotic aisles of her local grocery store in Sana’a, Nabila is busy removing items that her three children have discreetly sneaked in to her shopping cart. “We’re not buying junk food,” she tells them, returning them one by one to the shelves.

But little does she know that many of the items she chooses to keep in the cart are actually “junk food” too. With some brands not writing all ingredients of their food labels and limited consumer awareness, her choices are limited to her motherly intuition.

High fructose corn syrup, also called isoglucose, is a thick liquid that lurks in all sorts of items at your local grocery store’s shelves and many fast food menus. You can find it in yoghurts, ketchup, cereals, pancake syrup, ice-cream, soft drinks, cookies, canned soup and fruit juices, among many other items.

How high fructose corn syrup is made

High fructose corn syrup is made from corn kernels. But that’s just the beginning of the process. Actual syrup production necessitates a whole string of industrial processes including high-velocity spinning and the introduction of three different enzymes to incite molecular rearrangements.

The enzymes turn most of the glucose molecules in corn into fructose, which makes the substance sweeter. This 90 percent fructose syrup mixture is then combined with regular 100 percent glucose corn syrup, to get the desired balance of glucose and fructose, somewhere between equal quantities of both to a ratio of 80 to 20 percent. The final product is a clear thick liquid that is sweeter than sugar.

It’s good because it makes everything taste good, but all this may come at the price of your health. Not only is high fructose corn syrup sweeter and easier to blend into beverages than table sugar, but it’s also a great preservative so it can be used in processed foods to extend their shelf life.

High fructose corn syrup is easier to transport and more economical in countries where the price of sugar are twice the global price, such as the United States and Canada. The syrup can be 20 to 70 percent cheaper than sugar.

In 1983, a beverage analyst estimated that by switching to high-fructose corn syrup, Coca-Cola gained a cost advantage of USD 70 million a year over Pepsi and its bottlers. A year later, Pepsi followed in Coke’s footsteps and also began using the artificial sweetener.

First of all, high fructose corn syrup does not exist in nature. A product of the complex process described above, it is genetically modified.

In 1982, when the artificial sweetener was introduced into the American food supply, children for the first time began getting type II diabetes and obesity rates soared. In at least one study, the syrup has been linked to both.

The syrup also has been shown to interfere with people’s metabolism so that a person feels hungrier than they really are. This is because high fructose corn syrup also limits the secretion of leptin into the body’s system. Leptin is a hormone that signals to the brain when you are full and, without it, the amount of food you consume is not controlled. In parallel to this, the manufactured sweetener also encourages the production of ghrelin, a hormone responsible for controlling appetite, sending your appetite into over-drive.

The American Journal of Clinical Nutrition in 2004 published a study noting that the rise in high fructose corn syrup consumption paralleled the rise in obesity rates in the U.S. and hypothesized that the way fructose is metabolized could be uniquely fattening. The authors later said that their study was meant to inspire further study, not to be a definitive declaration.

Because there are no enzymes to digest high fructose corn syrup, it is metabolized by the liver. The pancreas to release insulin the way it normally does for sugar, so fructose converts to fat more readily than any other sugar. An overworked liver produces significantly more uric acid, multiplying the risk for heart disease.

Although a number of associations have claimed that high fructose corn syrup isn’t unhealthy when consumed in moderation, it is hard to gauge just how much one consumes because, just like sugar, it is contained in so many foods one doesn’t know about.

According to a food technology expert, two of the enzymes used to make the syrup -alpha-amylase and glucose-isomerase- are genetically modified to make them more stable.

Enzymes are very large proteins made up of a chain of amino-acids. Through genetic modification, specific amino-acids are changed or replaced so the enzyme’s “backbone” won’t break down or unfold. This allows the industry to use the enzymes at higher temperatures without them becoming unstable.

But there’s another reason to avoid high fructose corn syrup. Consumers may think that fructose is healthier than sugar because they associate it with fruit, but a team of investigators at the United States Department of Agriculture discovered this to be untrue. A study they conducted proved a fructose diet to lead to many more health problems than a glucose diet.

Researchers have discovered low levels of the toxic element mercury in high fructose corn syrup, according to the Environmental Health journal. The research was based on a limited test of only 20 samples of corn syrup, but mercury was found in nine of them.

Mercury is toxic in all its forms. Given how much high-fructose corn syrup is consumed by children on ice cream and pancakes, it could be a significant source of mercury never before considered.

Until further research can prove or disprove that high fructose corn syrup is the devil’s candy, going back to basics and embracing all natural organic foods is a must. Consumers should read food labels as if they were health warnings.

Artificial sweeteners are not used in locally manufactured products, but high fructose corn syrup is present in imported goods sold in the local markets.

“Artificial sweeteners are not healthy for the human diet as they cause cancerous build-ups,” said Saleh Al-Ghaylan, nutritionist at the Consumers Protection Association of Yemen.