The Silly Secret about Chicken McNuggets

Your Chicken McNugget is already 56% corn before you swim it through the high fructose corn syrup dipping sauce they give you. But do you know what else is in it? 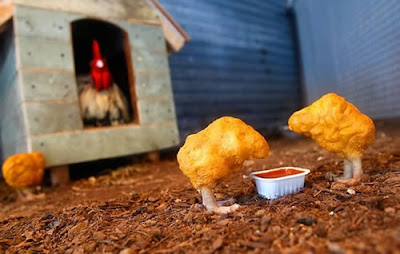 Proust had his madeleines to evoke the taste of childhood; those of us born after the atomic age have chicken McNuggets.

Turns out the little poultry bites are made of some of the same stuff that goes into one of the most popular toys of the latter 20th century: Silly Putty.

The shocking (well, sort of shocking) revelation came as part of a CNN investigation as to why McNuggets on one side of the Atlantic taste different than on the other. Apparently, British McNuggets are cooked and then coated, where as the opposite is true for American ones. Because the British McNuggets absorb less oil, they have less fat.