It’s all about taste he says. They’ve found that HFCS-free and organic foods just taste better.

Remember the early days of culinary-profiling when sugar was Public Enemy Number One and mom quaffed diet soda until the world went sour on saccharine? The next victim was fat. We feasted on fat-free everything and gorged on pasta. Then carbohydrates were demonized. Atkins slimmed us on red meat, bacon and high-fat diets, but we craved carbs and felt like we puffed-up like blowfish the second we ate them. Processed foods were the next root-of-all-evil. High-fructose corn syrup (HFCS) quickly joined them in the crosshairs, creating the latest, easy-way-out, feel-good, target-rich environment for those looking for the (next) root cause of obesity. HFCS is in everything! Get rid of it, say opponents, and replace it...with sugar. Aaah, the cycle of life.

Read More
Posted by First Grade at 9:15 PM No comments: 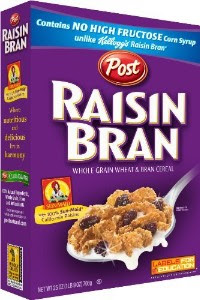 Raisin Bran is my favorite cereal. High fructose corn syrup used to be in both brand name products, but Post has been my favorite brand of raisin bran since the day I read the labels and discovered Kellogg's product is made in Mexico these days, not in Battle Creek, Michigan. Post makes theirs in St. Louis, Missouri.

I'd been out of raisin bran for a while, but today was Wal-Mart day. When the big purple Post Raisin Bran box jumped off the shelf and into my hand, imagine my amazement at seeing a new blue banner splashed across the front:

Now, there's some likeable advertising, telling you what you need to know and sticking it right in the competition's face. You go, Post!

Read More
Posted by First Grade at 9:03 PM No comments: 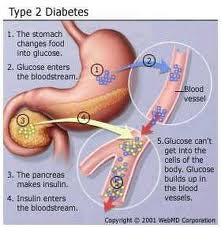 Drinks or foods with high fructose corn syrup may increase risk of type 2 diabetes mellitus and cardiovascular disease, according to a new animal study.

The study by A. Sheludiakova of University of Sydney in Sydney, Australia and colleagues found rats drinking sugary beverages got more abdominal fat, higher levels of triglycerides, and developed impaired insulin/glucose homeostasis, compared to those drinking water, even though the former did not gain more weight than the latter.

The researchers gave Male Hooded Wister rats free access to a drink with 10 percent sucrose or a 10 percent fructose/glucose (50/50) drink or water as controls in addition to a normal diet for 56 days, which is equivalent to four years for humans. Wister rats live an average of 3.1 years.

At the end of the dietary intervention, they measured metabolic parameters including triglycerides in the blood, liver triglycerides, abdominal fat, and oral glucose tolerance.