Dietary Fibber
Don't be fooled by polydextrose and other fiber additives. 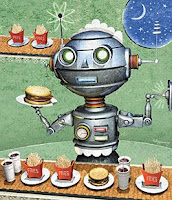 I was eating Cocoa Pebbles recently for dinner (yes, I'm a bachelor) when I noticed something strange on the nutrition label. Cocoa Pebbles, according to the box, is a "good source of fiber." Who knew that I could get as many grams of fiber from Cocoa Pebbles as I could from a bowl of Cheerios or a slice of whole wheat bread? After a little research, I learned that higher doses of fiber are showing up in all sorts of bizarre places, like yogurts, cookies, brownies, ice creams, and diet drinks. Fiber, perhaps the only nutrient to be mocked in a Saturday Night Live parody commercial, is getting a makeover. And although we're eating more of it, it's not the same nutrient we've always known.

The fiber in Cocoa Pebbles comes from a little-known ingredient called polydextrose, which is synthesized from glucose and sorbitol, a low-calorie carbohydrate. Polydextrose is one of several newfangled fiber additives (including inulin and maltodextrin) showing up in dairy and baked-goods products that previously had little to no fiber. Recent FDA approvals have given manufacturers a green light to add polydextrose to a much broader range of products than previously permitted, allowing food companies to entice health-conscious consumers who normally crinkle their noses at high-fiber products due to the coarse and bitter taste of the old-fashioned roughage. These fiber additives serve dual purposes—they can serve as bulking agents to make reduced-calorie products taste better, such as the case with Breyers fat-free ice cream, and carry an added appeal to consumers by showing up as dietary fiber on food labels.

The problem with this is that nobody knows if these fiber additives possess the same health benefits as natural fiber found in whole grains, fruits, and vegetables. Fiber, which consists of nondigestible carbohydrates, was already one of the least understood nutrients even before the introduction of ingredients like polydextrose. Nutritionists and scientists have wrestled for years with how to define fiber and measure its health impact. It's a tricky thing to conduct a fiber study. (Consider for a moment the logistics of organizing a placebo-controlled, randomized, double-blind, fecal-mass study.) Even when it comes to the natural, wholesome stuff, like oats and kidney beans, nutritionists don't know for sure whether the health benefits derive from the fiber itself or from the collective impact of high-fiber foods.

The most recently accepted grouping by the Institute of Medicine divides fiber into two categories: dietary and functional. Dietary is the kind found naturally and intact in oat bran, whole wheat, beans, prunes, peas, and almonds, and other plants. Functional refers to both the synthetic variety like polydextrose as well as naturally occurring inulin, which is extracted and purified from chicory roots.

Polydextrose shares with dietary fiber one fundamental property: It seems to rev up your GI tract. It does so, however, at a fraction of the level of wheat bran. And while diets heavy in oat bran have been shown to lower cholesterol levels and whole grains have been linked to lower risks of heart disease, there's no evidence that polydextrose protects cardiovascular health. A spokeswoman for Danisco, a leading producer of polydextrose, says it promotes digestive health but added: "Of course, it is harder to prove without doubt the health benefits of adding a single ingredient to the diet, than it is to prove the benefits of consuming natural fibers in fruits." Studies on animals have shown that inulin has a pre-biotic effect by altering intestinal microflora, but the "potential beneficial effects in humans are not well understood," according to a 2005 report by the IOM.

But you wouldn't know that from the FDA-approved food labels, which don't distinguish between dietary and functional fiber. The FDA allows polydextrose to be labeled as a dietary fiber, just the same as whole oats. The same polydextrose products in Canada, which has tighter classification regulations, wouldn't show the fiber content because Health Canada doesn't consider polydextrose to be a dietary fiber. Naturally, food manufacturers in America are taking advantage of this loophole—to the distress of nutrition watchdog groups. "Companies are putting fiber into foods like cookies and ice cream and making people think these are healthy foods, when in fact they should be eating fruits, vegetables, and whole grains. It's dressing up junk food as health food," says Bonnie Liebman, director of nutrition at the Center for Science in the Public Interest in Washington, D.C. "We have no idea if polydextrose has the same benefits as bran. It's deceptive."

For example, Campbell's V8 High Fiber, which Liebman calls "high fibber," claims on its label to offer "20 percent of the recommended daily value" of fiber per 8-ounce glass. As Liebman pointed out in a recent report, the fiber that Campbell's is talking about is maltodextrin, which she says has not been shown to have "any impact on regularity, or any aspect of digestive health." You may have seen the goofy Fiber One Yogurt commercial in which a supermarket employee watches an older woman wolf down yogurt after yogurt. "That's her fourth free sample. ... She's almost had a whole day's worth already," he says, flabbergasted. "And I still can't taste the fiber," the woman replies incredulously. There's a reason for that. The makers of Fiber One Yogurt haven't invented some magically creamy and delicious version of wheat bran. They simply stuffed the yogurt with inulin. A spokeswoman for General Mills, the makers of the yogurt, defends the advertising by pointing to studies showing that inulin suppresses appetite and promotes regularity. Inulin has not been shown to reduce cholesterol levels or lower blood pressure and has a much smaller laxative effect than wheat bran, says Liebman.

Ironically, the rise of these faux-fibers is driven by the greater attention that consumers are paying to nutrition labels. The food companies, in other words, are teaching to the test. Whether it's reducing fat and calories or adding fiber and vitamins, the industry is getting ever more clever at manipulating ingredients of snacks and other treats so that the stats mimic the nutritional data of fruits and vegetables. To be sure, the fortification of foods can facilitate healthier eating. There's not much difference between getting your calcium from milk or from fortified orange juice. (Sometimes, the added nutrients may be beneficial on their own but not when they're inserted into certain foods. The omega-3 fatty acids pumped into eggs, for example, don't cancel out the cholesterol.)

The fiber trend is different and more worrisome. The benefits of "fiber" nutrients like polydextrose are questionable. The makers of Cocoa Pebbles admitted as much when asked about the use and promotion of polydextrose as a dietary fiber. "We are removing the polydextrose ingredient from Pebbles. That is actually happening now," says Scott Monette, a spokesman for Ralcorp, which owns Post cereal brands. He says the company is instead fortifying the cereal with higher doses of vitamin D, which he describes as a "more timely and relevant" nutrient. Just last month, it was reported that vitamin D may protect against common colds and dementia. That should ease my mind next time I rip open a box of Pebbles.