An column in the Washington Post explores the connection between politics, corn and obesity. Subsidies enables the market to sell “‘large quantities of calories as cheaply as possible,’ especially calories coming from corn.” to the apparent detriment to the health of millions and the destruction of the environment. 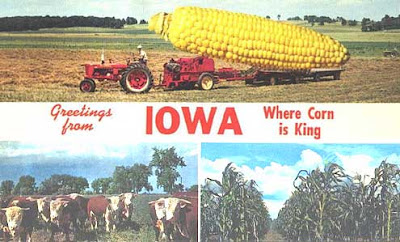 Much of the river of cheap corn becomes an ocean of high-fructose corn syrup, which by 1984 was sweetening Coke and Pepsi.

America's food industry uses about as much petroleum as America's automobiles do. 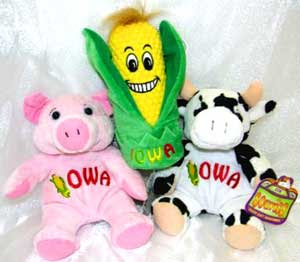 Tom Vilsack, Iowa's former governor, calls his "the most important department in government," noting that the Agriculture Department serves education through school nutrition programs and serves diplomacy by trying to wean Afghanistan from a poppy-based (meaning heroin-based) economy. But Vilsack's department matters most because of the health costs of the American diet. If Michael Pollan is right, the problem is rooted in politics and, in a sense, Iowa.

Pollan, author of "The Omnivore's Dilemma" and "In Defense of Food," says that after World War II, the government had a huge surplus of ammonium nitrate, an ingredient of explosives -- and fertilizer. Furthermore, pesticides could be made from ingredients of poison gases. Since 1945, the food supply has increased faster than America's population -- faster even than Americans can increase their feasting.

Agricultural commodity prices generally fall. But since a rare surge in food prices gave the Nixon administration a political scare, government policy, expressed in commodity subsidies, has been, Pollan writes, to sell "large quantities of calories as cheaply as possible," especially calories coming from corn.

"All flesh is grass" says the scripture. Much of the too-ample flesh of Americans (three of five are overweight; one in five is obese) comes from corn, which is a grass. A quarter of the 45,000 items in the average supermarket contain processed corn. Fossil fuels are involved in planting, fertilizing, harvesting, transporting and processing the corn. America's food industry uses about as much petroleum as America's automobiles do.