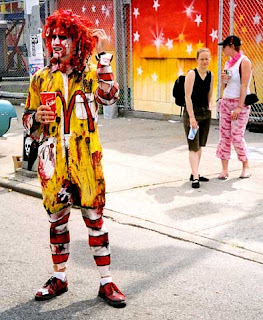 A new study suggests most fast-food beef and chicken items come from corn-fed animals. It’s not a new revelation; Michael Pollan’s 2006 book The Omnivore’s Dilemma documented the ubiquity of corn products — or corn-fed products — in supermarkets as well as fast-food restaurants, thanks in no small part to huge government subsidies for corn. But according to the study’s authors, this is the first time anyone has measured the trend in meat through scientific means.

By looking at carbon and nitrogen isotopes, co-authors A. Hope Jahren and Rebecca Kraft concluded that out of the 162 fast food burgers they tested, only 12 could have been from cows fed anything other than corn. And all of the chicken sandwiches were made from corn-fed chickens. Their meat samples came from McDonald’s, Burger King and Wendy’s franchises in different cities across the U.S. — and all the non-corn-fed samples came from West Coast Burger Kings.

The authors also claim that the presence of particular isotopes proves these animals were kept in cramped confinement. But Dr. Frank Monahan, who has performed similar studies in Ireland, told Forbes that the findings didn’t necessarily prove confinement — if the animals were given feed grown with nitrogen-rich fertilizer, that could lead to similar levels of the nitrogen 15 isotope.

As for oils used in deep-frying, the study concluded: “Wendy’s clearly used only corn oil, whereas McDonald’s and Burger King favored other vegetable oils; this differed from ingredient reports.”

Both Burger King and McDonald’s declined to comment on the study, while a Wendy’s spokesman told Forbes that the company has “very strict procedures in place” on animal welfare.