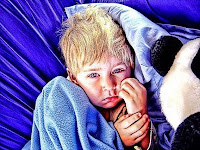 Does anyone really care about the welfare of our children? Take a glimpse of a few recent highlights: unsafe lead levels in children's toys, clothes, and bibs, salmonella in peanut butter, and an E. coli outbreak that has sickened 19 children in Colorado. What's next? Mercury in corn syrup! If you think this story line is part of a horror movie, you're dead wrong. This is reality in America. What are we doing to our children?

If you haven't removed corn syrup from your diet, there is no better time than the present. The sweetening of American children with corn syrup has turned dangerously sour. Corn syrup is a huge factor in the childhood obesity crisis that is associated with high blood pressure, high cholesterol, and type 2 diabetes. Then there is dental disease associated with too many sweets and corn syrup is a big ingredient in soda, candies and cookies. Now, we have many foods that have tested positive for low levels of mercury including Hershey's Chocolate Syrup, Nutri-Grain Strawberry Cereal Bars, Hunt's Tomato Ketchup, Kraft Original Barbecue Sauce, Yoplait Strawberry Yogurt, and many more. Kids get a daily dose of mercury, a well-known poison that leads to brain damage,learning disabilities, and many other problems. I guarantee that this is not good news for CSAPs.

While researchers and food industry leaders argue over what is a safe level of mercury for kids, I have to ask, "Why would you want kids to eat any mercury at all?" How can anyone ethically design a study that has kids ingest mercury and wait years to see what damages occur? Some researchers are saying there is cause for concern, others request more tests, and of course the food industry carries a familiar mantra, "our food is safe." Let me see, where have I heard this before, could it be from the company in Georgia who knew their peanut butter was contaminated with salmonella and released it anyway, or how about the tobacco industry who insisted smoking was safe while thousands were dying? Unfortunately, it is our children who suffer most if they are exposed to long-term mercury levels.

What does mercury do to a child? All forms of mercury are harmful and very young children are at greater risk than adults. Some health problems caused by mercury include:

Damage to the development of the brain and nervous system;

Mercury in pregnant women is passed to the developing baby;

Prolonged exposure to high levels of mercury can permanently damage the brain, kidneys, and developing infant;

Pregnant women may have no symptoms, but developing infant may still have severe disabilities;

The US Environmental Protection Agency warns that mercuric chloride and methyl mercury may cause cancer.

Why is there mercury in corn syrup? Better living through chemistry seems to be the answer. A "mercury-cell" is used to make lye (caustic soda), one of the ingredients used to separate cornstarch from the corn kernel according to Dr. David Wallinga, director of the Minneapolis-based nonprofit Institute for Agriculture and Trade Policy (IATP) and co-author of two studies finding mercury in foods with corn syrup. (Link)

Here's a quick chemistry lesson. Chlor-alkali plants used the century old process of a "mercury cell" to electrolyze saltwater to form sodium hypochlorite (NaOCL) and sodium hydroxide (NaOH, also called caustic soda). This reaction occurs in an electrolytic cell, where liquid mercury acts as a cathode (positive electrical charge) and attracts sodium (Na) cations (positively charged) to form an amalgam (mixture of mercury with another element). This reaction collects a sodium hypochlorite (NaOCl) gas at a graphite anode (negative electrical charge). The next step is the amalgam combines with water and the sodium (Na) reacts to form sodium hydroxide (NaOH) and hydrogen (H). The mercury is a by-product that is reused. However, mercury vaporizes easily, so the end results are both the product and the wastewater have mercury contamination.

Luckily most chlor-alkali plants in the US no longer use this antiquated process as safer techniques have been around since the 70's. However, according to the 2007 Oceana Report, there are some US plants that are resistant to change. This group is known as the "Filthy 5" and includes: (1) ASHTA Chemicals in Ashtabula, Ohio, (2) Olin Corporation in Charleston, Tennessee, (3) Olin Corporation in Augusta, Georgia, (4) PPG Industries in Natrium, West Virginia, and (5) ERCO Worldwide in Port Edwards, Wisconsin. The Filthy 5 accounted for nearly 4400 pounds of mercury released in the US annually at the time of the Oceana's July, 2007 Report (Link).

Recently, Audrae Erikson, President of the Corn Refiners Association, argues, "To imply that there is a safety concern based on this incomplete and flawed report is irresponsible." It is important to note that mercury was not found in all food samples, just in 17 of the 55 samples randomly tested. As usual, there are more details to the mercury problem than realized and regulation of toxins in our environment remains one of our greatest challenges to protect the health of our children. We have long recognized that mercury in industrial wastewater contaminates certain fish in our food supply, so the corn syrup issue is just one more reason to increase pressure on the Filthy 5 to update to safer and cleaner technology that does not use spew mercury into our food or our environment.

So what do we do while we are waiting for the experts to figure this out? There are plenty of foods without corn syrup and corn syrup adds no healthy nutritional benefits. Simply look at the ingredients and choose the foods that do not have corn syrup or high fructose corn syrup. While we're at it, let's have our kids do some ingredients reading, so they learn how to make healthy choices too!