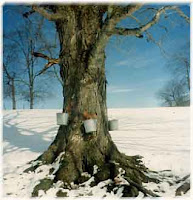 For years, Errol Tabacco was a maple sugar hobbyist. Each February, he'd tap about 100 trees on his property, haul buckets of sap to his garage and boil it into syrup for his family and friends.

This year's different: There's gold in these here hills.

Spurred by retail prices of $60 or more per gallon, maple sugar producers like Tabacco are going all out to harvest it, tapping more trees, investing in new sap lines and building new sugarhouses in hopes of cashing in.

Tabacco is racing to get up to 12,000 trees tapped by the time the sap starts running during the next few weeks.

For backyard hobbyists and larger commercial producers alike, New England's "sugarin' season" could be a real moneymaker this year. The University of Vermont's Proctor Research Center estimates 300,000 taps will be added this year.

Global demand for the sticky-sweet syrup outstripped supply last year, in part because lingering winter cold and heavy snow combined to slow sap flow and hinder get-out-the-sap efforts in Quebec, Maine and parts of Vermont. That, combined with the exhaustion of Canadian reserves, has helped drive up prices, experts said.

And demand shows no sings of slowing.

"Maple syrup is the perfect product for our culinary times," said Barry Estabrook, a contributing editor for Gourmet magazine. "It's a natural product, so it appeals on that level. I also think it comes at a time when kitchen chefs are interested in exploring alternate sweeteners. It could be an alternate to refined white sugar and high-fructose corn syrup for reasons of flavor."

U.S. demand for maple syrup - and maple-flavored syrups - has remained constant with regular use by about 30 percent of the population for decades, according to market research firm The NPD Group.

For the home cook, the price per gallon isn't so daunting, Estabrook said.

"If you think about the quantities most homemakers buy in, they're not buying $50 gallons. They're buying 16-ounce containers, so it's not an outrageous outlay," Estabrook said.

Gina Bordeaux, 49, of Duxbury, uses it at breakfast, on oatmeal and in baking pies. She says the price hike isn't enough to get her to stop using it or switch to a cheaper maple-flavored syrup.

"It's a Vermont tradition. You gotta have syrup. You're not a Vermonter if you don't," said Bordeaux.

The four- to six-week sugaring season begins when winter loses its bite. As daytime temperatures rise into the 40s, then plunge below freezing at night, the sap - a clear liquid that looks like water - starts running.

It takes about 40 gallons of sap to make a gallon of maple syrup, and Vermont produces a leading 500,000 gallons a year.

As sugar makers go, Tabacco is a new breed. A lawyer by training, the 35-year-old father of two - who works for the U.S. Department of Homeland Security by day - decided to become a bigger operator in part because he saw the price of syrup rising.

He's investing hundreds of thousands of dollars in his new operation, and believes that barring an unexpected plunge in retail prices, he'll make money.

"It was a combination of the right time for me, personally, and the fact that sugar is getting such a high price now. It made it economically viable," Tabacco said.

Check Out Facebook's Just Say No to Fake Maple Syrup
Via the Associated Press
Posted by First Grade at 11:46 PM