Children of the Corn: Subsidies, Incentives and Health Reform

More awareness of the ills of consuming greater amounts of foods and drinks containing high-fructose corn syrup may create a backlash against the corn subsidies whose agribusiness roots run deep enough to stymie any meaningful reform. 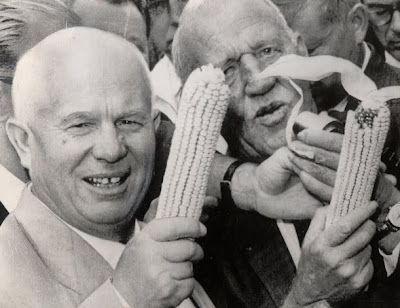 In 1959, as the tensions of the Cold War seethed into their second decade, Soviet Premier Nikita Khrushchev paid a visit to the United States. His stops included New York, Washington, Los Angeles, and, much to the head-scratching of the CIA, a little stop in between: Iowa (and yes, a 50th anniversary commemoration exists).

Russia had stolen the formula for the atomic bomb. She could send satellites into space. But the one area where we the capitalists had her beat wasn't in a secret smuggled around in briefcases handcuffed to wrists but in a practice as old as civilization itself: agriculture.

In Iowa, Khrushchev's eyes confirmed what his spy planes had probably already told him: corn fields sprawled unbroken in all directions like great sheets of Siberian snow. He believed that he could replicate the American agricultural model to break his reliance on an unsustainable and inconsistent supply of imported grain.

Back in the USSR, a perfect storm of inadequate resources, overstretched reforms, and sparse infrastructure left the inept Soviet premier's massive corn fields as withered as his plans to save the famine-plagued masses. Khrushchev had instead sown the seeds of his country's implosion.

Here in the United States, farming constitutes a large part of our national identity, and it is largely misunderstood. The ideal of the family farm has been foreclosed upon by great agribusinesses that replace the amber waves of grain we idealize with regimented row upon regimented row of subsidized corn.