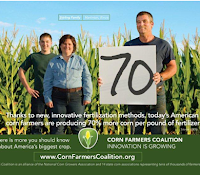 The U.S. corn grower is about to get some extra attention in Washington, D.C. In this age of increased scrutiny on high-fructose corn syrup and farm subsidies, which are often not welcome, corn farmers are asking for this.

The Corn Farmers Coalition, a group of 14 state corn growers' associations and the National Corn Growers Association (NCGA), is taking its message direct to the policy battleground on Capitol Hill with a massive media blitz. The campaign will feature advertising throughout the Washington Metro rail system, inside Union Station, Capitol Hill media outlet Web sites and even in the Washington Nationals baseball team’s home game programs. The program is estimated to cost $1 million, says coalition director Mark Lambert.

Read More
Posted by First Grade at 8:17 AM