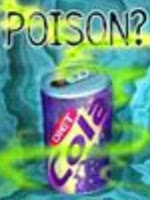 "the only soda ingredient that has been proven to cause cancer, like both cigarettes and alcohol can, is artificial sweeteners" - Yes, and HFCS is a synthesized man-made chemical, the toxicity of which numerous studies indicate.

Someone posted and deleted a comment to my last post about the soda tax. I won't identify them, because obviously they chose to retract their comment, but I did want to respond to it because I don't think it's an uncommon reaction to this kind of position:

"The American Beverage Association, and its simulated grassroots spinoffs that have been set up to oppose this, thank you for your time and effort on their behalf. "

In opposing the beverage tax, I want to make a couple things clear.

I realize that the soda industry, like almost every other industry (such as the snack food, alcohol, automobile, oil, hemp, solar power, and gastroenterology industries) has an association and a lobby, and spends lots of money to promote its agenda. Of course, the bigger the industry, the bigger their lobby. But if we were proposing a tax on something that hardly anyone ever bought, would anyone really care?