Study: Anything but real maple syrup is for saps 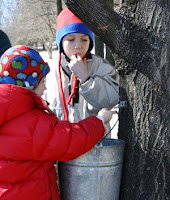 "If you're choosing syrup as a sweetener, pure maple syrup has a number of phenolics and high fructose corn syrup does not"

For maple syrup producers and lovers, this could be the best of times and the worst of times.

March is typically the peak time for tapping sugar maple trees for the sap that gets distilled into the sweet, amber elixir aficionados consider far superior to the cheap, fake stuff made from high fructose corn syrup. To get maximum sap flow, producers need a run of daytime temperatures in the 40s and nights in the 20s, but this season, the weather's been too warm.

"This is a very poor season so far," said Jill Walker, who runs Rick's Sugar Shack in East Haddam with her husband, Rick. "Last year we made 135 gallons, but this year we'll be lucky to get 60."

But while 2010 is looking like a lean year for syrup - at least for the pints from southern New England - demand could surge, thanks to a University of Rhode Island scientist's findings.

Navindra Seeram, assistant professor of biomedical and pharmaceutical sciences who specializes in medical plant research, has determined that maple syrup contains 20 compounds beneficial to human health. Among them are anti-oxidants known as phenolics that help prevent cancer and diabetes. Already known was that maple syrup contains the minerals zinc, thiamine and calcium.

Read More
Posted by First Grade at 8:02 AM