Coca Cola: We Don't Need To Make A Cane Sugar Version Because You Already Have Mexican Coke 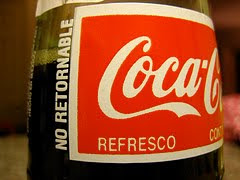 A few weeks back, we asked readers if they would buy a cane sugar version of Coca Cola and an overwhelming 89% of you said "yes." So Consumerist asked Coke if the company had any plans to introduce non-HFCS version -- a la Pepsi Throwback -- on a national scale. The answer -- no, because we already have Mexican Coke.

"We already provide a Coca-Cola with sugar in the U.S. - is Coca-Cola from Mexico and it's available year round," Greg Galvez, vice president and general manager of Importation and Commercialization, Coca-Cola North America, told Consumerist.

Galvez appears to contradict himself on the topic of cane sugar vs. High Fructose Corn Syrup.