Study: Hey, Hipsters, Mexican Coke Might Be a Myth 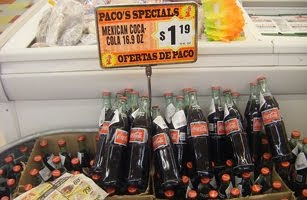 The failure to find sucrose in Mexican Coca-Cola could be [due] to two reasons: the Coke is old and the sucrose "inverted" (split into glucose and fructose), or the company used HFCS instead of sucrose.

A study released on Oct. 27 in the journal Obesity looked at the chemical structure of sweeteners in Coca-Cola, Pepsi and other sodas. There were a lot of surprising findings, but for now, here's one result that cut close to my Brooklyn-foodie fad-loving bones: Mexican Coke, which people thought to be superior to American Coke because it uses real cane sugar in place of high fructose corn syrup (HFCS), could be a myth.

Read More
Posted by First Grade at 9:57 AM